Discusses early action, Harvard admissions (from 2017), and how EA applicants have a better likelihood of being admitted, discussion of "a hook" and how EA can help in general

The numbers are in. Harvard has admitted approximately 5.2% of applicants for the class of 2021. This number is not much different from last year, nor from the most selective universities in the US. Yet when we look at the students who applied early action compared to those who applied in the regular decision round, the numbers tell a different story. On every level, Harvard is still one of the most difficult universities to get into. However, understanding how many students are admitted in early action and how they prepare can provide insight into your own student’s future. Are you in the process of applying for college or starting your college preparation? Vitae.me (get it here for iOS or Android), the only app you'll need to help you keep track of your application to-dos and tasks, is here to help (whether you are applying to Harvard or any other US-based university).

Out of the 2,056 students accepted to Harvard for the 2017-2018 academic year, 938 of those were early action admits. Keep in mind, though, that early action means a lot more than simply applying early. To fully understand what this means, we will break down the terms, the numbers, and the qualities the admissions committee looks for in their applicants. We will also discuss what this means for international students.

What is "early action?"

How many early action applicants get into Harvard compared to regular admission?

Out of Harvard’s 39,506 total applicants, 2,056 were admitted. However, when we look more closely at those numbers, they get much more interesting. It turns out that the number of early action applicants offered admission to Harvard is, proportionally, just over four times higher than regular decision. 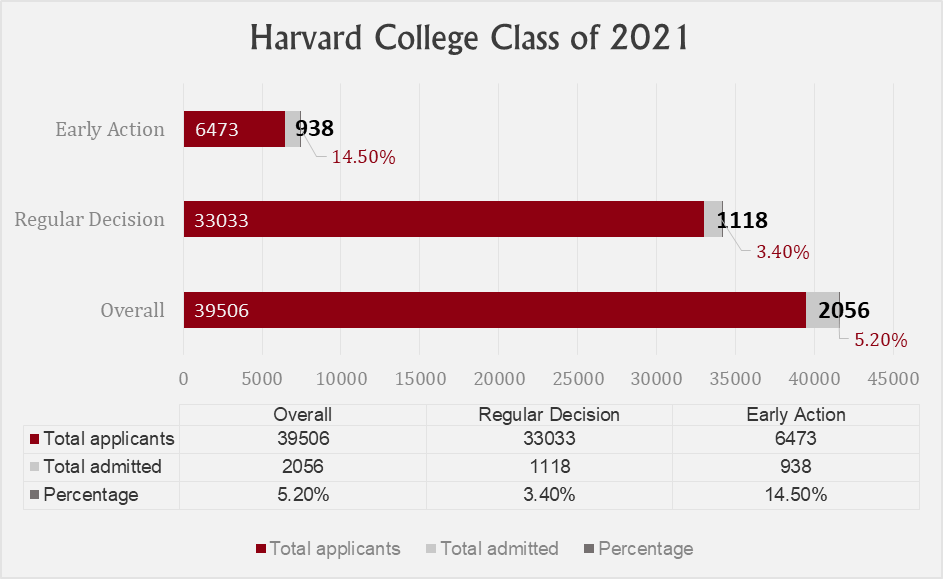 Does early action give people an unfair advantage?

The short answer is no. In and of itself, early action is not an advantage. While it is clear that, proportionally, more applicants were admitted in the early action round, those who apply early action have been preparing for years to get accepted to Harvard.

There are three things that early action applicants to Harvard have in common:

Because early action applicants are prepared well before others, they have a better chance of getting accepted to Harvard.

What is a hook and why is it important for getting accepted to Harvard?

In short, a hook is a quality that makes a student attractive to a particular university, Hooks come in many forms; while some can be developed, some are demographic.

Four examples of hooks are:

If a student has some combination of these hooks (for example: artistically talented and underrepresented), even better. Prestigious universities are constantly searching for these students.

Here are two things that hooks are not:

Even though being from outside the US is only part of a hook, the numbers tell us that international applicants to Harvard do benefit from applying early action. The following numbers on the graph reflect only those accepted, not the total number of applicants. 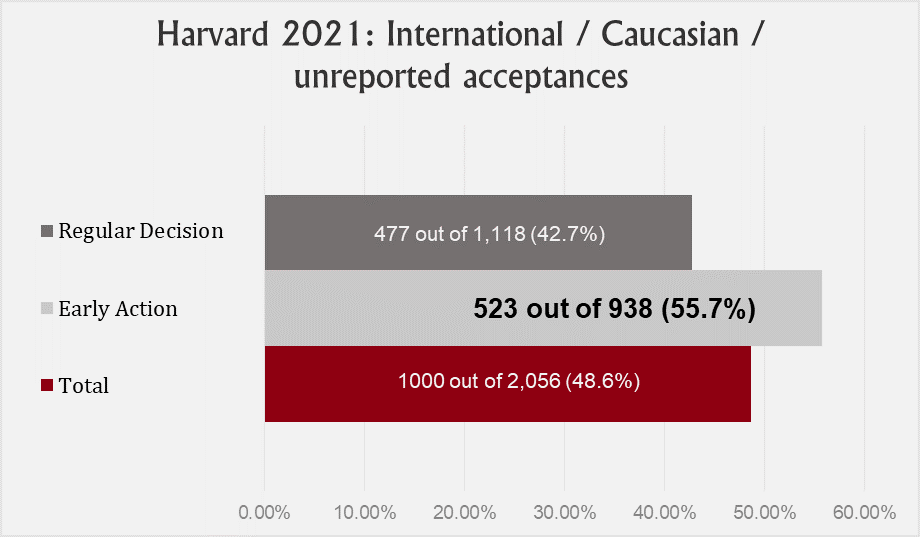 The above-average numbers for early action is good news for those who know that Harvard is their first choice. However, keep in mind that to get into Harvard, a lot of hard work has to happen, starting as early as possible.

If a student is dreaming of attending Harvard College, they need to plan for it starting freshman year. Test-wise, Harvard requires either the ACT or the SAT with writing, and at least two SAT subject tests. To have the scores they need will require at least three exam sittings.

Students also need to make sure they are active in extracurricular activities all throughout high school. This will help build their resume, which will make developing and presenting their hook in their application much easier.

Regardless of if you are applying to Harvard or not, college applications and the application process is a long and complex one. We're here to help take some of the stess out of it with Vitae.Me (download here for iOS or Android). Keep track of your deadlines, tasks and applications all in one place! Harvard, here you come!

Use code OGWEND before Dec 31 for 50% off our annual membership!

Use code OGWEND before Dec 31 for 50% off our annual membership!